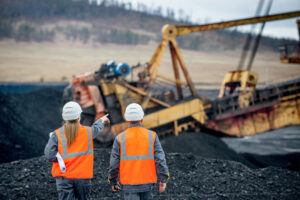 The case concerned severed mineral interests claimed by the Wynnstay Estate in Wales and issues of trespass, conversion and adverse possession. The central issue was the right of NRW (the surface owner) to extract for its own use minerals claimed by Wynnstay (the Claimant).

Wynnstay is a typical landed estate owner, once one of the largest landowners in Wales. Land was sold off at various stages and often in large tracts and (as was, and still is, common practice) the underlying minerals were retained.  The minerals had formed a major part of the Estate’s income during the late 1700’s through to the early 20th century. Evidence of mainly metalliferous workings is still visible today in the form of old mine workings and quarries. Today mineral extraction is by surface quarrying with a number of smaller quarries still active, operated mainly by NRW.

Wynnstay claimed ownership of extensive reserves of strata covering a large area of Mid Wales, including metalliferous vein minerals, beds of sandstone, shale etc all forming part of the generic description ‘mudstone’, which comprised the underlying bedrock. Wynnstay’s title was by way of numerous reservations, including wording such as ‘all … stone’, ‘all … quarries’, ‘all … substrata’, ‘all … other substances’ and ‘all … minerals whatsoever’. The rights to work were also generally reserved, often with an obligation to pay compensation to the surface owner for damage arising from their exploitation.

NRW (as successors in Wales to the Forestry Commission) had been quarrying mudstone bedrock for use in roadmaking for some years, and in 2016 approached Wynnstay to negotiate rights to work the stone in consideration of a payment.  Negotiations foundered, and Wynnstay commenced proceedings against NRW.

NRW argued (1) that the trustees did not in fact own the mudstone or, if they did, (2) that NRW had acquired title to it by adverse possession.

Although the judge states that she took into account the inclusion of the word ‘stone’, the judgment focusses on the meaning of ‘minerals’ and mainly on whether mudstone is worthy of commercial exploitation now, with minimal consideration of the word ‘stone’, and dismisses the relevance of its historic and commercial use for infrastructure purposes, including roads and buildings, at the time of the reservations and since, despite caselaw going back to Wainman v The Earl of Rosse (1848) and Midland Railway Co. v Checkley (1867), Lord Romilly in the latter case expressing  the view that “..stone is in my opinion clearly a mineral…”.

In this case, Mrs Justice Falk decided that mudstone was the common rock of the district and, consequently, Wynnstay did not own it under the express reservations in the conveyances considered.

The judgment also appears to reverse the principle established by Wainman, that minerals reserved under enclosure acts are to be interpreted broadly to include (unless there is contrary wording) stone and quarries and all things under the surface. The case therefore has wide application to minerals reserved on enclosure.

In addition, in holding that NRW had acquired title to the mudstone by adverse possession, the Judge effectively said that digging into the soil by a few centimetres for building a road could give adverse possession of the entirety of the subsoil of that area to the centre of the Earth, even where there were severed mineral interests.

This decision, unless reversed on appeal, would appear to drive a coach and horses through the law and practice relating to mineral reservations, and potentially places many mineral owners and landowners in an invidious position of losing the rights to extensive and valuable deposits of minerals held by them for generations. It also places operators who may have leased minerals from those mineral and land owners in the position of having potentially leased them from the wrong persons and facing claims from third party claimants.

It is not known whether the case will be appealed but if so, it should be followed carefully by all those with an interest in mineral working in England and Wales particularly and may also have persuasive value in Scotland.