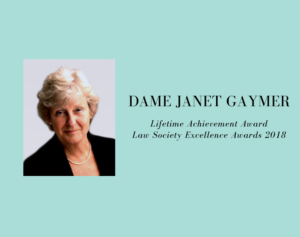 Dame Janet Gaymer, an advisory board member of national, new-model firm Excello Law, has been recognised by the Law Society Excellence Awards 2018 with this year’s Lifetime Achievement Award.

The judges’ commendation read: “Janet’s career achievements have been many, both in private practice and the public sector. Her ongoing commitment to gender diversity in the law is to be celebrated, particularly her work in the senior ranks where there is the greatest disparity. As a pioneer in this area she is an inspiration to women who aspire to become leaders in their fields”.

In her acceptance speech, Janet commented: “It is a very special award for me for three reasons: it is given by a female president of the Society, it comes from my own profession, and at a time when women have overtaken men as the majority of practising solicitors.

“I have been fortunate to have had a fulfilling and fascinating career in the law and latterly in the public sector.  I have found that I have learned most when I have taken on new challenges.  The profession today faces its own challenges, the need to attract and retain talent, whether male or female and not forgetting older members of the profession, continues, while the old ways of working require fundamental reassessment in the face of new business models, advancing technologies and artificial intelligence.

“Meanwhile we must protect the very high professional standards which have ensured that the qualification of solicitor is respected here and abroad.”

George Bisnought, MD of Excello Law, said: “We are thrilled for Janet to receive such acknowledgement from the Society for the significant and pioneering role she has played in the profession. She is inspirational to all that meet her and has been a trusted and respected advisor to Excello Law.  She has our heartfelt congratulations on this wonderful award.”

As one of the UK’s pre-eminent employment lawyers, Janet has been described by her peers as ‘the foremost female solicitor of her generation’ and was ranked as the ‘top employment lawyer in Europe’ in Chambers’ Guide to the Legal Profession (2000-2001).  Janet is currently a non-executive member of the House of Commons Commission and chair of the House of Commons Administration Estimate Audit and Risk Assurance Committee and Members Estimate Audit Committee.

Further biographical information can be found at:  http://www.janetgaymer.com/about.html