Brexit will see increasing demand for the services of a notary

As part of a series of articles, Excello’s lawyers are addressing various issues our clients need to be aware of when preparing for the Brexit transition period, especially when the pendulum seems to be swinging towards a future trading relationship based on WTO terms, rather than an agreed new treaty.

Part of the preparation required by our clients involved in any form of international trade of goods and services, or indeed their employees’ immigration and emigration, may well be to be ready to start dealing with a strange sub set of lawyer known as “notaries”.

Unless you have already had course to instruct a notary, the chances are you may not be entirely clear what they do (and equally important what they don’t.)  You’re not alone!  Many solicitors don’t either.  The short answer is they “authenticate” documents for use in foreign jurisdictions.

Notaries have been seeing a steady increasing demand for their services just now.  Brexit is only going to mean more.  The same discussions which we as solicitors have as to when impact of COVID 19 on the economy will be over, are also repeated by notaries across the country.  Signs that it is, will be an increase in requests to notarise papers for use in importing and exporting goods and services overseas, particularly to and from the Far East.  Signs that it may not include a steady stream of requests from individuals to notarise powers of attorney for use in connection with the sale of villas and timeshares bought abroad in happier times.  There is also a big increase in work connected with those people emigrating, especially doctors and nurses to Australia.

It has been discussed in notarial circles that if the European Union really wanted to be vindictive, then as part of the negotiations it would simply insist that all paperwork dealing with exports to the European Union would have to be notarised.   There are already lots and lots of notaries on the continent but there are only 800 or so in this country.  That is not a typo.  There are only 800 in the whole of England and Wales.

We hope this note will assist those clients who discover they need a notary public and particularly those who need to see one urgently!

What Sort of Documents Need Notarising 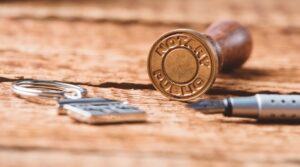 The bread and butter work for many notaries are Powers of Attorney for use abroad for any number of transactions.  For example a company may want to appoint a local agent to act on his behalf in negotiating contracts.   We also get involved in authenticating papers for those emigrating overseas or getting married.  Sometimes families need a “Consent to Travel” if a minor is travelling unaccompanied (or with non-relatives) abroad and you would not believe the amount of paperwork involved if you want to adopt a child from India!

But Do You Need a Notary?

Essentially a notary’s input is only needed because many foreign jurisdictions only recognise a notary public’s certificate on a document as opposed to a solicitor’s.  This applies equally to common law jurisdictions and not just the civil law regimes of the near Continent but again, as above, it is distinctly possible that this may increase following Brexit.  It is nevertheless always a good idea for the client to investigate if they have definitely been told they must see a notary.  Sometimes seeing a solicitor is fine, sometimes they can see a JP or even a doctor or a police officer.

If they do need to see a notary then here is where we get to the crux of the whole issue.  The cost involved and the time it all takes.  Seeing a notary public is not a rubber-stamping process nor akin to the “simple” production of a solicitor’s certified copy.  Because our signature and seal is an internationally recognised symbol of our authority, we do have to go through a particular process.   What we as notaries have to check is that the document has been properly executed in such a way as to be valid for use in the receiving jurisdiction. That can involve questions of law as that applies here and abroad and in the case of companies will almost certainly involve a review of its Articles of Association. Perhaps now is a good time to remind us that only formal directors of a company can execute deeds on behalf of the company.   Notaries are frequently approached by someone carrying the title of, say, “marketing director” or indeed a Company Secretary who believes that they have ostensible authority to sign documents but does not.

All this can take time and hence money.  Some years ago the Notaries Society and others were involved in a debate with the then Competition Commission and Office of Fair Trading about price fixing, the consequence of which was that semi-formal scale fees were abolished.  The rule of thumb adopted now is that notaries will usually charge on a time incurred basis, based on the equivalent rate of a local, senior commercial solicitor in private practice.  From this most notaries will, however, have had experience on many matters and be able to give a pretty good estimate.  Solicitors could help in managing client’s expectations.

What can you do?

If you discover you definitely do need to see a notary, the Notaries Society website www.thenotariessociety.org.uk has a useful link to a page where local notaries can be found.   Even in these strange times we currently live in, it is almost certainly the case that physical presence with the notary will be required.  Although there are moves afoot for electronic or remote notarization the circumstances in which this can be offered are very limited and usually requires some form of pre-existing relationship.    Basically, however, the notary must really be given as much notice as possible with copies of the relevant documents that require notarisation.

If you have been given any particular specific instructions from the attorneys abroad, so much the better.  Different jurisdictions can require different things with regard to the formality of executing documents, even down to the number of witnesses, their gender (especially in some Muslim countries) and even the colour of ink used.  By way of example, the 50 states of the US all can have (slightly) different requirements and if you deal with the US Federal Government, there can be other issues!

The longer the notary has to consider the papers in advance, the quicker the time in front of the client can be.

Ok, So What Does a Notary Actually Do?

Before a notary can complete a notarial act, he has to Identify the appearer sufficiently (using basically an enhanced money laundering process as for solicitors) but he or she then has to go through an additional process of checking the Capacity of the appearer (are they bankrupt or mentally ill), their Authority (are they in a representative capacity or on their own account and how has that been evidenced?  Is there a Board Minute for example.) Finally, (and this can be the most tricky) their Will or understanding.

Although we do not advise on the law in foreign jurisdictions, we do have to check that the appearer generally knows what they are signing up to. This problem can be compounded if one is presented with a foreign language document and the client’s instruction “No, we don’t speak Bulgarian but were told just to sign it.  Will it be ok do you think?” (No!)

Notaries do not normally draft the actually documentation although this is sometimes done if the papers provided are not appropriate.  In the case of a company appearing through one of its directors or other officers, then identity checks are undertaken on the director and indeed the company.  The company’s ‘Will’ is usually best evidenced by means of a board minute being provided.

Please therefore do bear in mind that even if a really urgent, last minute job does come, it may simply not be possible for the notary to complete the process if this further verification needs to be undertaken.  As I say, a notary will be able to advise if he is given plenty of warning of what is required.  Involving your Excello lawyer as early as possible in the process really does assist so that any need for notarial involvement can be checked.

It is often the case that a notary’s signature and seal by itself is not completely sufficient for the purposes of the receiving jurisdiction.  A further process known as “legalisation” may be required.  Most countries have now signed up to the international Hague Convention and this involves the obtaining of a stamp called an Apostille from the UK Foreign & Commonwealth Office.  This usually takes at least five working days to obtain but agents can sometimes get it quicker, albeit at a cost.

In addition to the Apostille though, some countries require further “legalisation” at their London embassy.  Some countries charge a significantly higher fee for commercial documents as opposed to those for a private individual.  Those for the UAE can run to hundreds of pounds per document. Again, the notary can explain this if needs be.

The post Brexit will see increasing demand for the services of a notary appeared first on Excello Law.