Brexit update: Singapore, the music industry and governance of the new UK-EU relationship

In the UK’s post-Brexit world, the island nation of Singapore has cropped up in at least two contexts in the UK press and in UK Government announcements in December 2020 / January 2021. 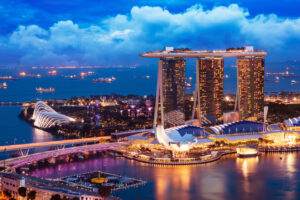 In the joint UK-Singapore ministerial statement of 10th December 2020 announcing the new UK-Singapore free trade agreement, the two countries stated that “the UK and Singapore are like-minded partners with shared historical ties and excellent economic relations….As island trading nations, both countries share a strategic commitment to global trade, and the free flow of capital and investments”.

The joint ministerial statement also confirmed that, in addition to the UK-Singapore free trade agreement which had been signed, both countries have agreed to start scoping the modules of a UK–Singapore Digital Economy Agreement (DEA), with the aim of launching negotiations on the DEA in early Spring 2021. The statement went even further, however, by confirming that the UK and Singapore have committed to commence and endeavour to conclude negotiations to deliver “updated, high standard and ambitious investment protection commitments” within two years and four years respectively of the UK- Singapore free trade agreement’s entry into force.

There is clearly a wider agenda here because the joint ministerial statement itself adds that “the signing of the UK-Singapore FTA [free trade agreement] serves as a significant step in the UK’s interest to seek membership of the Comprehensive and Progressive Agreement on Trans-Pacific Partnership (CPTPP)” and that “Singapore supports and welcomes the UK’s intent to submit its application to accede to the CPTPP in early 2021”. As there is media speculation that, under a Biden administration, the USA might seek to re-join the CPTPP, from which the previous US administration had exited, the UK’s intention to apply to join the CPTPP, with the support of Singapore (as vice-chair of the so-called CPTPP Commission), may well have far-reaching consequences for global trade and for the UK’s role within it.

Given the UK Government’s obvious admiration for the success of Singapore as a successful independent economic power and trading nation, it is not surprising, therefore, that a second context in which Singapore has been mentioned in the UK recently has been the suggestion that the UK models itself economically on Singapore and that the UK becomes a kind of “Singapore-on-Thames”.

According to a report in The Times” on 18th January 2021, the UK Prime Minister, Boris Johnson, is seeking to expand on the Singapore theme with plans to cut red tape and turn the UK into the “Singapore of Europe” following  the UK’s departure from the EU.  These plans apparently might include proposals to “reform” EU-derived rules, which are currently embedded in the UK as part of “retained EU law”,  such as the so-called 48 hour working week. The problem is that these plans might run up against the “non-regression” rules in the UK-EU Trade and Cooperation Agreement of December 2020, which require in certain circumstances both parties not to weaken levels of protection in areas such as labour and social rights, in a manner affecting trade or investment between the parties, below the levels in place at the end of the post-Brexit transition period.

Rishi Sunak, the UK Chancellor of the Exchequer, is quoted in The Times report as saying: “Now that we have left the European Union, we have an opportunity to do things differently and this government is committed to making the most of the freedoms that Brexit affords us. This isn’t about lowering standards, but about raising our eyes to look to the future – making the most of new sectors, new thinking and new ways of working.” He clearly would not accept the argument that the UK is seeking to regress from UK-EU standards of protection.

The Times of 21st January 2021 has now reported that, “according to senior diplomatic sources”, the EU is prepared to ease post–Brexit border friction if the UK drops its plan to create a “Singapore on the Thames”

We shall see what happens but meanwhile, “Singapore” is likely to figure large in the lexicon of post-Brexit UK politics for the indefinite future.

Brexit and the Music Industry

On 20th January 2021, The Times published a short letter from 171 UK classical and modern music artists and performers under the title, “Music tours in peril”.

The theme of the letter was that the recent “Brexit” deal, encapsulated in the Trade and Cooperation Agreement of December 2020 (TCA) and other agreements, had failed to deliver any real protections – and indeed had left a “gaping hole” –  for UK musical performers who, during the time of the UK’s membership of the EU and until the end of the post-Brexit transition period on 31st December 2020, had relied on visa-free and work-permit free travel (not only for themselves but also for their support staff and for their musical instruments) within the EEA for touring purposes. The position now depended on UK artists checking out the applicable rules in each of the EEA states that they wanted to visit as part of their tour – since the UK is now treated essentially as a “third country” like many other non-EEA member states for visa and work-permit purposes. The more restrictive rules now applicable to UK road hauliers wanting to transport musical equipment and other goods across national boundaries within the EEA is also a factor inhibiting multi-country musical tours by UK performers across the EEA.

There has been a lot of adverse publicity about the allegedly poor treatment of musicians by the TCA and the recent “Brexit” deal as a whole, with the UK and EU authorities blaming each other for the fall-out. The EU reportedly claimed that it had tabled an “ambitious” offer that would have exempted musicians from needing a visa but that this had been rejected by the UK Government. The UK reportedly claimed that the new offer did not include support staff and would still have required individual EEA member states to require work permits for UK musicians and their staff.

Sir Simon Rattle, one of the signatories to the letter, is reported to be applying for German citizenship (without giving up his UK citizenship) as a way of ensuring his continued ability to move around for work purposes within the EEA and anecdotal evidence suggests that he is not alone.

The Times of 21st January 2021 reported that the UK Government has now promised financial aid for musicians hit by post-Brexit touring costs but the full details are yet to be published.

Perhaps the last word at the moment should be given to the letter – writers who in the final paragraph of their letter wrote:-

“We urge the [UK] government to do what it said it would do and negotiate paperwork-free travel in Europe for British artists and their equipment. For the sake of British fans wanting to see European performers in the UK and British venues wishing to host them, the deal should be reciprocal”.

The free-flowing cultural life of Europe (of which the UK has been such an important part for so long) is for many a prize worth preserving.

Brexit and Governance for the new UK-EU Relationship

Title III (Institutional Framework) to Part One (Common and Institutional Provisions) of the UK-EU Trade and Cooperation Agreement of December 2020 (TCA) sets up the governance structure for implementing the UK and EU’s new relationship under the TCA.

Title III sets up a Partnership Council comprising representatives from the two sides and to be co-chaired by one representative from each side. Below the Partnership Council and reporting to the Council, Title III establishes a Trade Partnership Committee and 10 technically- focused Trade Specialised Committees as well as 8 more sector specific Specialised Committees. Reporting to and assisting the Committees, 4 Working Groups are set up. Provision is also included for the possibility of a Parliamentary Partnership Assembly and separately a Civil Society Forum to be established and for consultations with certain civil society and domestic advisory groups about the implementation of the TCA and supplementing agreements.

All this is separate from the governance system of the Joint Committee and Specialised Committees and other governance arrangements set up under the UK-EU Withdrawal Agreement of October 2019 (WA).

A feature of both these governance arrangements is a certain flexibility to enable decisions to be taken at the Partnership Council or in the Committees to make decisions implementing and in some cases amending the governance frameworks established under the TCA and WA respectively.

On 21st January 2021, a final report of the UK’s House of Commons Committee on the Future Relationship with the EU was published on the shape of future UK parliamentary scrutiny of UK-EU relations. This report was timely because that House of Commons Committee itself ceased to exist on 16th January 2021 and the posthumous publication of its final report was in a way a plea to the UK Government to set up appropriate arrangements in conjunction with the UK Parliament to enable future scrutiny by the UK Parliament of the work of these various TCA and WA bodies to take place. The report urged that various other existing UK parliamentary select committees be involved in setting up the new arrangements for UK parliamentary scrutiny of UK-EU relations.

Though the TCA in particular has been criticised in some quarters for alleged “gaping holes” that have yet to be filled, clearly quite a lot of thought was given by the UK and EU negotiators as to the future governance frameworks for the new UK-EU post Brexit relationship with a view to enabling the principles of cooperation behind the TCA and WA to be translated into practice.

From the EU side, there have also been developments and in particular, on 19th January 2021, the EU Commission announced that it was reorganising its Brexit taskforce – in a nutshell, with effect from 1st March 2021, the EU Commission’s Task Force for Relations with the UK (UKTF) will cease to exist and be replaced by a new Service for the EU-UK Agreements (UKS). According to the EU Commission’s announcement, the purpose of the UKS  will be “to support the efficient and rigorous implementation and monitoring of the Agreements with the UK, will become a Special Adviser to EU ”. In addition, Michel Barnier, the Chief EU Brexit negotiator, will become a Special Adviser to EU Commission President, Ursula von der Leyen, as of 1st February 2021 and will advise the President on the implementation of the WA and will provide expertise in relation to the TCA and its ratification process.

It appears that both sides are taking governance questions seriously in relation to both the TCA and the WA.

The post Brexit update: Singapore, the music industry and governance of the new UK-EU relationship appeared first on Excello Law.