Brexit and the Level Playing Field 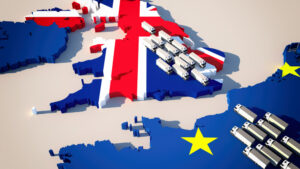 One of the most contentious areas of the UK-EU negotiations for a new post-Brexit transition period relationship was the issue now dealt with in Title Xl of Heading One of Part Two (Trade, Transport, Fisheries and other Arrangements) to the Transfer and Cooperation Agreement (TCA) under the heading “Level playing field for open and fair competition and sustainable development”.

It is worth analysing this section of the TCA to understand the hard-fought solutions that have been reached.

The principles and objectives behind the “level playing field approach” are expressly stated NOT to require the harmonisation of standards between the UK and the EU but each party confirms its determination “to maintain [its] respective high standards” towards ensuring such a level playing field “by preventing distortions of trade or investment, and by contributing to sustainable development”.

Each party is left free to put its own measures in place towards achieving its “level playing field” goals but, as further mentioned below, a specific disputes resolution and trade remedies mechanism is created by this section for dealing with problems arising from failures to reach the required level playing field. In addition, each party commits to legislate for competition laws which effectively seek to counteract certain types of anti-competitive business practices which distort trade and investment.

The section contains a specific chapter on subsidy control and provides in reasonably clear but non-comprehensive terms the types of subsidy that are not permitted. The chapter sets out principles which both sides need to respect in the granting of subsidies “with a view to ensuring that subsidies are not granted where they have or could have a material effect on trade or investment between the [UK and the EU]”. Each side must observe “transparency” in the grant of subsidies and, with respect to any subsidies granted or maintained within its territory, make information concerning such subsidies publicly available within six months of grant. The section contains detailed procedures for dealing with complaints by either side that the other has breached the subsidy rules set out in the section, culminating (if not otherwise resolved) in binding arbitration before an arbitration tribunal which can decide upon a limited suspension of obligations of the complaining party under the TCA where it has ruled in favour of the complaining party. This is in addition to other remedies which are laid out in the section for breach of the subsidy control rules. The section provides for each party to establish or maintain an operationally independent authority or body with an appropriate role in its subsidy control regime.

The section also contains general provisions requiring publicly-owned monopolies not to abuse their position as well as non-regression clauses in relation to taxation standards, labour and social standards and environmental and climate–related standards. Provisions are also included requiring the parties to uphold specified international standards in these areas. A provision requiring each party to have in place an effective system of carbon pricing as of 1st January 2021 is also included.

Title XI on the “level playing field” runs for some 38 pages and it is not easy to do it justice in a short blog but hopefully this blog will encourage readers to study the provisions in more detail.

Brexit and the Services Sector

Title II (Services and Investment) of Heading One of Part Two  (Trade, Transport, Fisheries and other Arrangements) to the draft Trade and Cooperation Agreement (TCA) deals generally with the Services Sector under the draft TCA, with other sections of the draft TCA dealing with specific services such as Aviation and Road Transport.

Commentators on the draft TCA have argued that the draft TCA is somewhat “thin” in its provisions for liberalising trade in services between the UK and the EU after the expiry of the post-Brexit transition period on 31st December 2020. Is this really the case?

The text of Title II certainly does contain some obligations consistent with liberalising the UK- EU trade in services, such as (with some exceptions including exceptions for existing non- conforming measures) :-

>>> A party shall not require a service supplier of the other party to establish or maintain an enterprise or to be resident in its territory as a condition for the cross-border supply of a service (Article SERVIN.3.3);

However, the provisions as a whole certainly fall far short of providing a single market for the supply of services and there are, for instance, no comprehensive passporting provisions for the supply of cross-border services or comprehensive provisions for the mutual recognition of professional qualifications.  Title II does contain some framework provisions designed to make it easier for service providers to gain cross-border market access in the UK and the individual member states, including provisions under the following headings:-

>>> Entry and temporary stay of natural persons for business purposes; and

These framework provisions do not, however, deliver what for some would be the holy grail of a single market for the supply of services.

On 28th December 2020, the UK Government issued a large number of updated or new guidance notices on subjects relevant to the supply of services and these are accessible on the UK Government “Transition” website  (www.gov.uk/transition). They include an updated general guidance note on “Selling services to the EU, Switzerland, Norway, Iceland and Liechtenstein from 1 January 2021” and country-specific guidance notes for the supply of services and travelling for business to all 30 EEA member states and to Switzerland. The general guidance note is particularly useful in raising flags on a number of issues that UK service suppliers should check out on a country-by-country basis in relation to the countries in the EEA or Switzerland to which they wish to supply services – the updated general guidance note includes sections on “trade regulations”, “VAT on sales of digital services”, “establishing and structuring your business”, “business travel and entry requirements”, “social security payments for employees”, “recognition of professional qualifications [including a specific subsection about “lawyers and auditors”] ” and “data transfer and GDPR [the EU’s General Data Protection Regulation (EU) 2016/679]”.

Much may be written about the supply of services between the UK and EU in the year ahead and market forces may well impel further liberalisations in the supply of such services in the future, resulting in supplementary agreements or amendments to the draft TCA.

Brexit and Trade in Goods

Perhaps the most trumpeted area of the UK-EU Trade and Cooperation Agreement (TCA) is the section dealing in Trade in Goods, which is in Title I (Trade in Goods) of Heading I (Trade) to Part 2 (Trade, Transport, Fisheries and Other Arrangements) of the TCA, because, according to the UK Government Summary Explainer (SE) document on the TCA last updated on 28th December 2020, the TCA “establishes zero tariffs or quotas on trade between the UK and the EU, where the goods meet the relevant rules of origin.” (paragraph 16 SE) .

The complex “rules of origin” provisions of Title I are, according to paragraph 17 SE, intended to ensure that “only “originating” goods are able to benefit from the liberalised market access arrangements agreed in the TCA, while reflecting the requirements of UK and EU industry”.  By way of example, the SE goes on to state in paragraph 17  that the rules of origin that the UK Government has agreed “for batteries and electric vehicles will ensure that UK- made electric vehicles are eligible for preferential tariff rates, supporting our [the UK Government’s ] move towards Net Zero”.

Though it is technical stuff, it is worth also quoting from paragraph 18 SE, which states that the chapter in Title I on the agreed rules of origin “also provides for full bilateral cumulation (cumulation of both materials and processing) between the UK and the EU, allowing EU inputs and processing to be counted as UK input in UK products exported to the EU and vice versa. The ambitious arrangements include facilitations on average pricing, accounting segregation for certain products, as well as all materials, and tolerance by value. The rules are also supported by predictable and low-cost administrative arrangements for proving origin”.

Title I also contains a chapter on technical barriers to trade (TBTs), which might also be described as “non-tariff barriers” to trade. According to paragraph 19 SE, the chapter builds on the World Trade Organisation (WTO) TBTs agreement “ and includes provisions on technical regulation, conformity assessment, standardisation, accreditation, market surveillance and marking and labelling” .

There are provisions for exchange of information between the UK and EU surveillance authorities on operational matters and on dangerous and non-compliant products and there are also very important separate annexes seeking to remove or reduce TBTs between the UK and the EU in the automotive, chemical, pharmaceutical, organic products and wine sectors.

There are separate chapters in Title I on Sanitary and Phytosanitary (SPS) Measures and on Customs and Trade Facilitation (CTF). According to paragraph 27 of the SE, the SPS chapter “ensures that the UK and the EU can maintain fully independent SPS rules to protect human, animal and plant life and health, preserving each party’s right to independently regulate, while not creating unjustified barriers to trade”.  According to paragraph 31 of the SE, the CTF chapter (which is supported by a number of additional Protocols and an Annex) together with TCA of which it forms part “provides for efficient customs arrangements covering all trade in goods “ and “as well as facilitating trade, …ensures that the customs authorities of both parties remain able to protect their respective regulatory, security and financial interests”.

The provisions of the TCA on trade in goods contain some of the most developed provisions in the TCA and are much more than a simple framework agreement and hopefully will give importers and exporters between the UK and the EU the comfort to move forward.